Have you ever wondered where Kempton Park Pumping Station gets all that water to supply London? Well there are several sources but the Queen Mary Reservoir at Littleton is by far the biggest. The reservoir is of titanic proportions and has been in constant use for almost 100 years!  It was commissioned by the Metropolitan Water Board and named after King George V’s consort Mary of Teck. It is operated today by Thames Water and forms an essential part of London’s water supply infrastructure. It serves several waterworks including Kempton Park, Ashford Common and Hampton pumping stations. Storing water in large reservoirs is essential to ensure the capital’s taps do not stop flowing during dry periods. Though it may seem London gets its fair share of precipitation, rainfall in London is on average less than Istanbul, Rome and Sydney!

The reservoir’s embankments rise 44 feet high and enclose a body of water 38 feet deep. When full, it has a top water surface area of 707 acres. Its continuous embankment is four miles round and contains enough space to easily accommodate the entire City of London with a moat all around. Within this huge expanse is held 6.7 billion gallons of water, enough to fill 10,000 Olympic size swimming pools. Its capacity once accounted for 30 percent of all raw water stored in the London area, which was sufficient to supply the whole of London for 22 days. Owing to a greater consumption of water per head, this figure has now been reduced to around 14 days. As further reservoirs have been constructed, the Queen Mary now makes up around 15% of the stored water in London.

The project to build a reservoir at Littleton was first proposed by the Metropolitan Water Board in 1911. The MWB’s Chief Engineer Mr. W.B Bryan initially suggested that two reservoirs should be built side by side. Bryan died in 1914 and was succeeded by Sir James Restler, who advocated that the two should be combined to make one with a spit in the middle to increase circulation. The contract to build the reservoir was awarded to Dick Kerr & Co., Ltd. and work began in 1915 during the First World War. Construction ceased in 1916 on the orders of the Ministry of Munitions who required Dick Kerr’s services to construct munition factories for the war effort. This cessation of work led to the MWB suing Dick Kerr for breach of contract, which resulted in an intense legal battle which had to be resolved in the House of Lords in 1918. The Metropolitan Water Board vs Dick Kerr legal case is still used as an example of ‘frustration of an agreement’. The MWB lost the case.

The project was resurrected after the war by the new MWB Chief Engineer Henry Stilgoe and a new contract was awarded to S. Pearson & Co.,Ltd (now Pearson publishing). When work resumed in 1920, it was discovered that a section of the partially constructed western embankment had to be moved 300 yards eastwards to avoid an area of quicksand. This in turn caused the southern embankment to require alteration which necessitated an act of parliament, as it swallowed up a further 89 acres of the village of Littleton. Several cottages and farm buildings were demolished as a result of this alteration. The MWB compensated by building twelve replacement cottages which survive today in New Road.

The construction of the reservoir at one time employed 2000 workmen on a site that was so expansive that 32 miles of dedicated railway line were installed to carry the vast quantities of earth and clay. Running on these lines were 20 locomotives and 500 wagons. Several locomotives were specially commissioned by Pearson for the construction and some of the 0-6-0 standard gauge tank engines were named after local places including Littleton, Ashford, Laleham, Sunbury and Shepperton. Pearson’s completed work on the 31st December 1924 at a total net cost to the MWB of £1,989,175 (£122 million today).

One of the senior engineers who oversaw construction was John Watson Gibson. He would later direct the construction of the Phoenix breakwaters for the Mulberry Harbours used during the D-Day landings. Gibson was knighted in 1945 and local people may be familiar with the Stanwell pub named the Sir John Gibson. Whilst working on the Queen Mary, Gibson purchased Stanwell Place and adjacent farms amassing an estate 350 acres in size. This land ‘by chance’, happened to be perfect for building reservoirs and he sold it to the MWB in 1936 to construct the King George VI reservoir.

The reservoir is kept filled by an adjacent pumping station at Littleton. On the 19th March 1924 Mr. R W James (Chairman of the MWB Works and Stores Committee) laid the foundation stone of the pumping station which was designed to lift raw water from the River Thames into the reservoir. Thames water is conveyed to the pumping station via a channel which runs to the Penton Hook intake at Laleham. At the intake stands a gauge house which records the volume of water being taken from the Thames. Two of the original venturi meters from this building are now at Kempton Steam Museum.

Inside the pumping station were four single cylinder uniflow steam engines made by Worthington Simpson. Each of these engines drove a Worthington Simpson centrifugal pump, each with a capacity of 75 million gallons per day. Three of the original centrifugal pumps (minus the steam engines) are still in use today, though are now driven by electric motors. The remaining pump is still coupled to its original steam engine which remains in situ. It would take all four of these pumps running day and night 22 days to fill the reservoir from empty.

The reservoir and pumping station were inaugurated on the 13th June 1925 by His Majesty King George V accompanied by Her Majesty Queen Mary. His Majesty performed the ceremony by putting the pumps into operation by electric signal and named it ‘The Queen Mary Reservoir’. In attendance was future prime minister Neville Chamberlain who was the Minister of Health at the time.

Water from the reservoir is conveyed by gravity to Kempton through a two mile long underground conduit six feet in diameter or via the Staines Aqueduct. The water is then passed through Kempton’s primary and secondary filtration systems prior to distribution. It would take both triple expansion steam engines at Kempton working flat out 176 days to empty the Queen Mary.

The reservoir is not without tragedy. On the 23rd August 1937, a BA Swallow monoplane which had taken off from Hanworth aerodrome nose-dived into the reservoir and exploded on impact. The plane belonged to the Midland Bank Flying Club and was being piloted by 29 year old Herbert Willis who was unfortunately killed in the accident. The crash set about a recovery mission which took a week to find Willis’s body along with the rest of the wreckage.

During the Second World War the reservoir water level was dropped by five feet to avoid any flooding should the banks been breached. The reservoir was hit on several occasions by high explosive bombs but the banks were never destroyed entirely.

The reservoir was used in 1943 by Special Operations Executive (SOE) to test a motorised submersible canoe nicknamed Sleeping Beauty and the Welman one-man midget submarine. The Welman was designed by an appropriately named Colonel John Dolphin.

Owing to its size, the reservoir is also a brilliant spot for wildlife and recreation. It is known to many as the home of the Queen Mary Sailing Club. 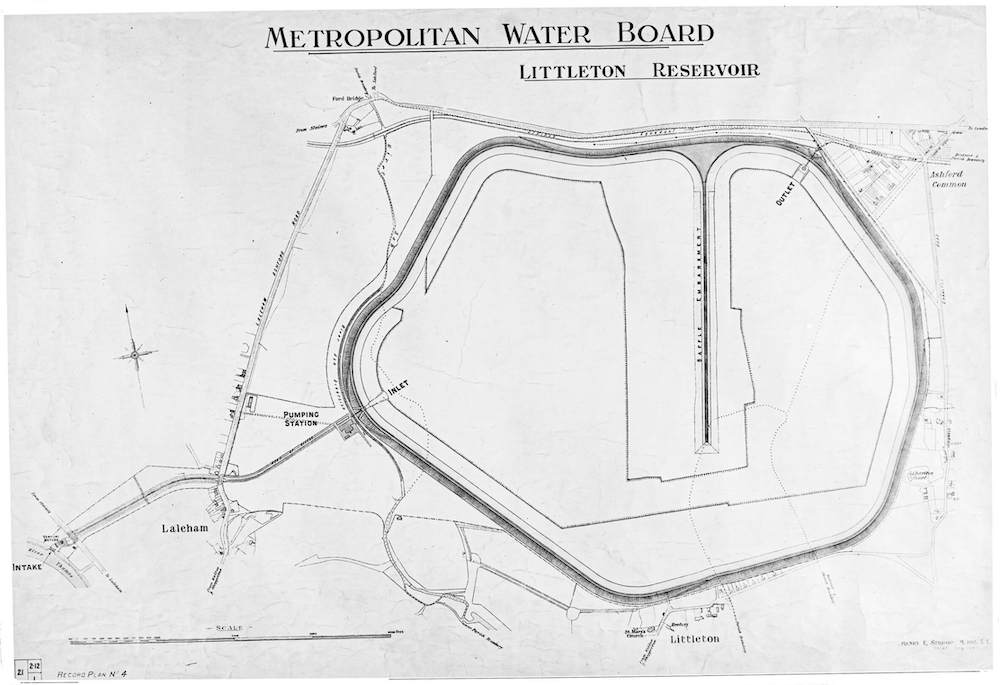